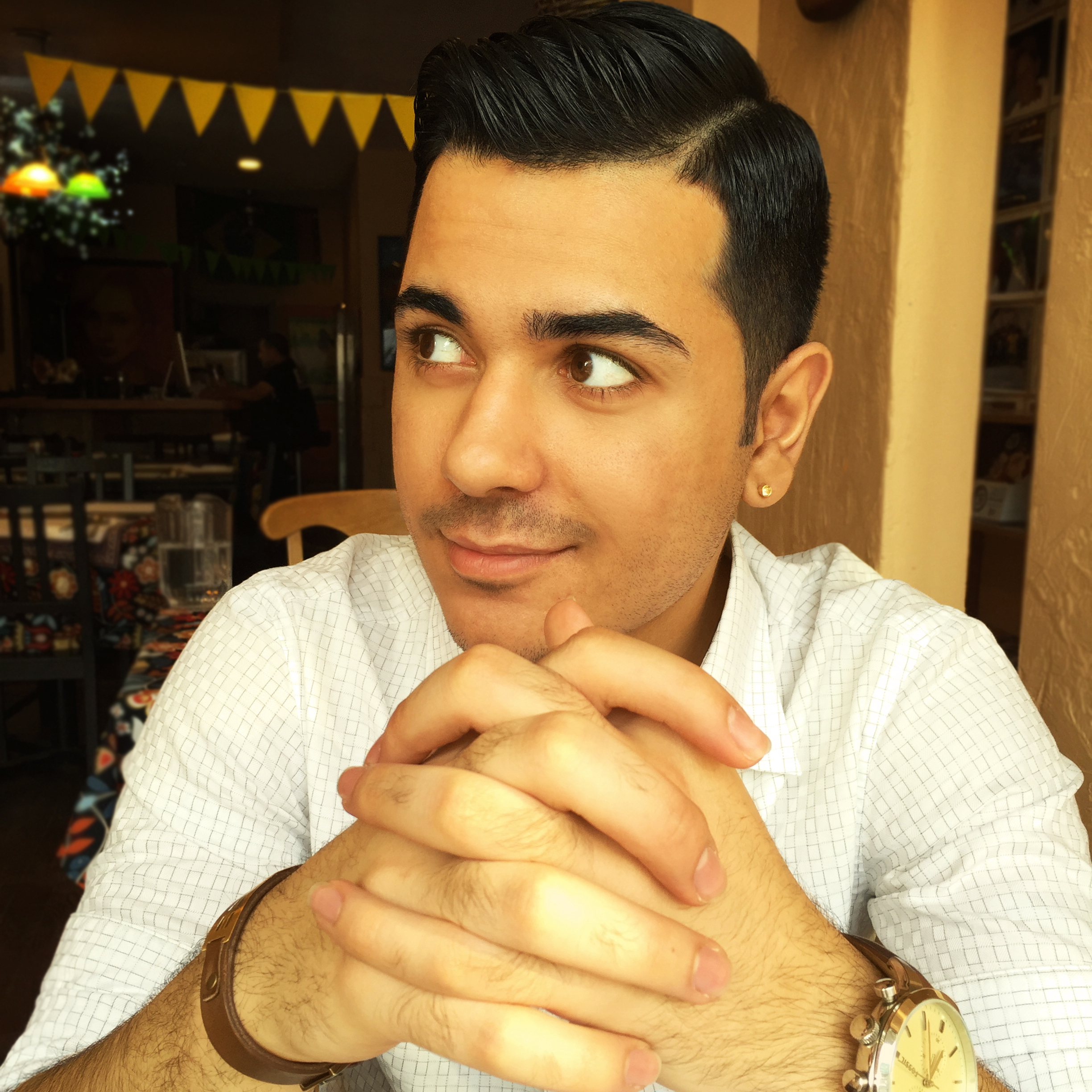 Attention is a useful and versatile tool used in various deep learning approaches. In this post, we will look into the main concepts behind attention and its use in the Transformer model.

Attention mechanism in the topic of learning algorithms is motivated by how we, humans, pay attention to different components of our sensory inputs. In the context of visual attention, depending on our objective, we bring different components of our visual input to focus and blur the rest (Hoffman and Subramaniam, January 1995). Figure 1 (a) shows an image of maple taffies with a patch of the image masked. If we were to guess the content of the masked region, we would pay more attention to certain areas of the image, while ignoring the rest. The pink areas shown in Figure 1 (b), depicting the twisted fingers holding a popsicle stick, some maple syrup on the snow, and a popsicle stick attached to the maple syrup, will lead us to guess that the masked region must be covering a rolled up maple taffy. Other regions in Figure 1 (b) such as the background, or the color of the person’s sleeve (indicated by gray circles) do not contribute to our decision-making.

Figure 1: (a) Masked image (b) Attention to the pink circles help guess the content of the masked region, while the gray regions receive no attention.

In the context of natural languages, we perceive similar contextual correlation between different components. For example in the sentence:

We expect a liquid to appear in the sentence once we read the word drank. There is a strong correlation between these two words in this sentence. Hence, as shown in Figure 2, the word drank attends to the word water, however it does not directly attend to the word glass.

Origin of The Attention Mechanism

In order to better understand the importance and advantages of the attention mechanism, we first need to look at the problem it tries to solve. For this purpose, we briefly examine the sequence to sequence model architecture. 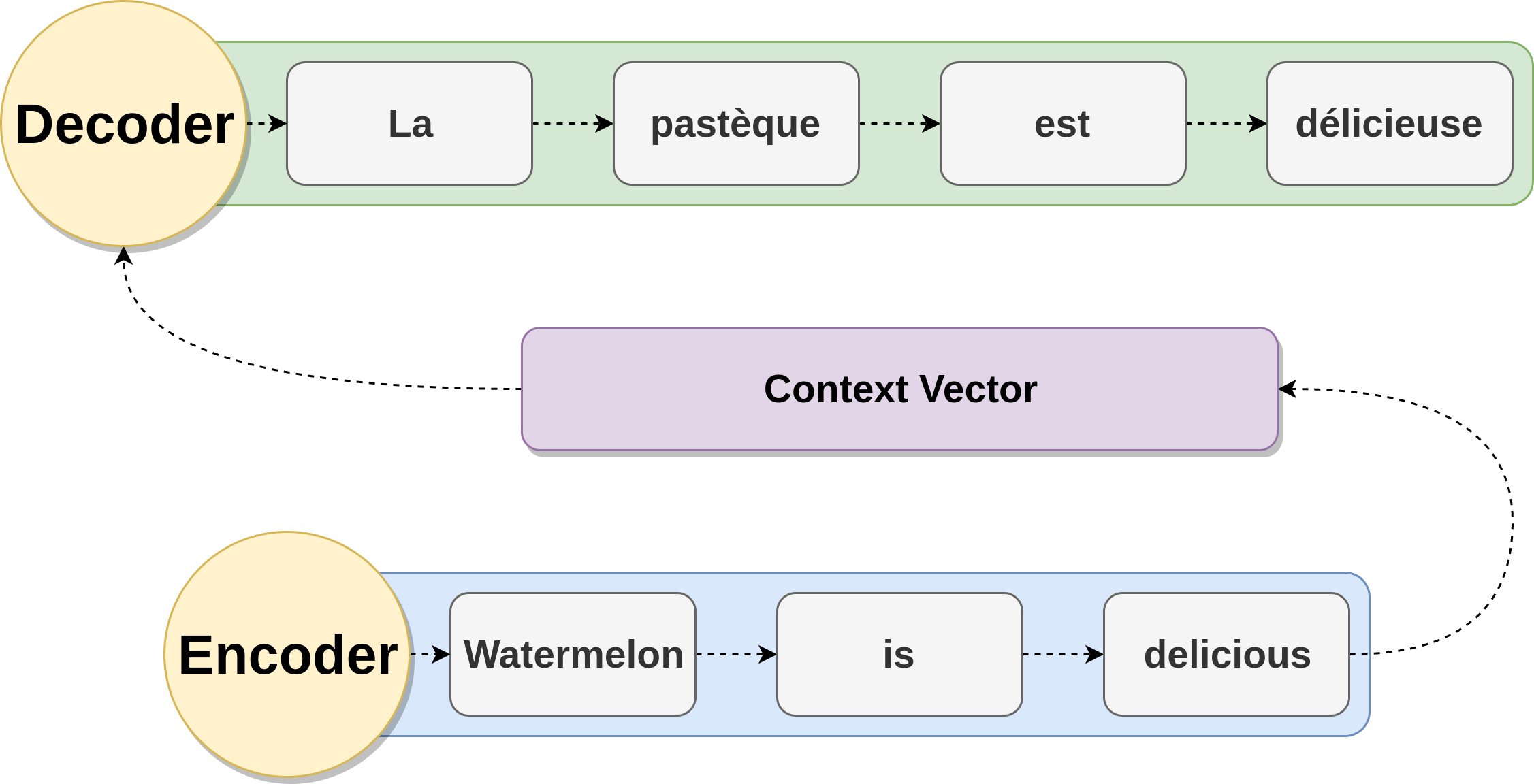 Bahdanau et al. (May 2015) showed that a major drawback of using fixed-size context vectors is the limitation of this vector to summarize and remember all the necessary information in the source sentence. Having a fixed-size context vector introduced a bottleneck on the performance of sequence to sequence models. When the model is presented with longer length source sentences, the model would simply forget part of the information from the earlier part of the source sentence. In the context of neural machine translation, this led to poor and incoherent translations for longer sentences (Bahdanau et al., May 2015). Attention mechanism was, therefore, proposed by Bahdanau et al. (May 2015) to remedy this issue. 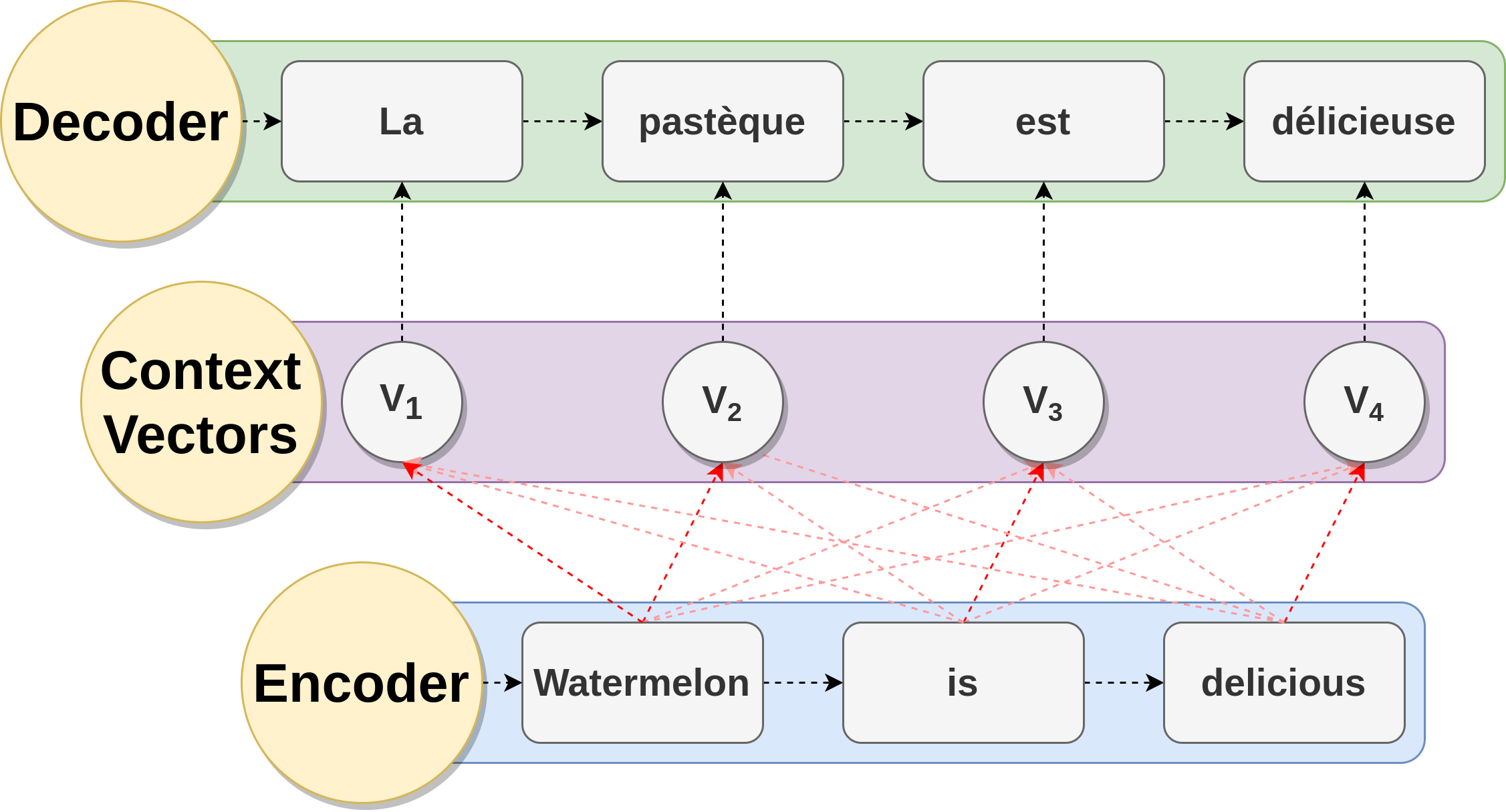 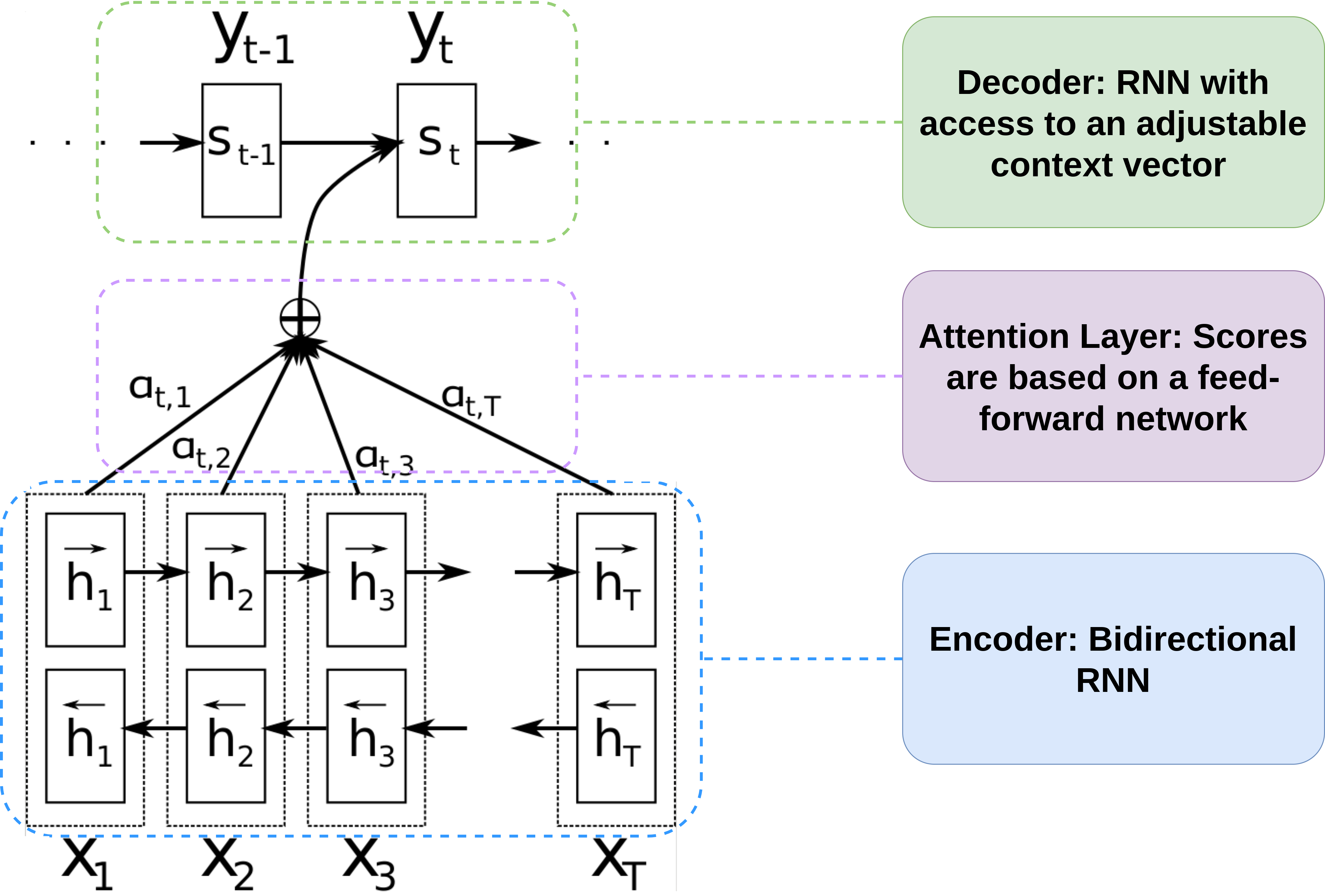 Since the attention mechanism was introduced in NMT, we will base the examples of this section on this task, and we will focus on the encoder-decoder architecture that was proposed by Bahdanauet al. (May 2015). Assume, that we have a source sequence \(x\) of length \(T\), and the target sequence \(y\) of length \(M\):

The encoder will receive the source sequence \(x\) and will produce hidden state representations \(h_i\) at time step \(i\). As shown in Figure 5, in the architecture proposed by Bahdanau et al. (May 2015) the encoder is a bidirectional RNN and \(h\) at time \(i\) is defined as:

Where the weights \(\alpha_{ji}\) for each source sequence hidden state representation, \(h_i\), are alignment measures indicating how well an input at position \(i\), and an output at position \(j\) match:

Where \(v\) and \(W\) are weight matrices that will be learned by the network. These alignment scores define how much of each of the source hidden states is needed to produce each of the target outputs or in other words, how much the target words should attend to the source sequence in the decoding process. This concept is captured by the matrix of the alignment scores, explicitly showing the correlation between input and output words. Figure 6, shows the matrix of alignment scores for an English-French translation. 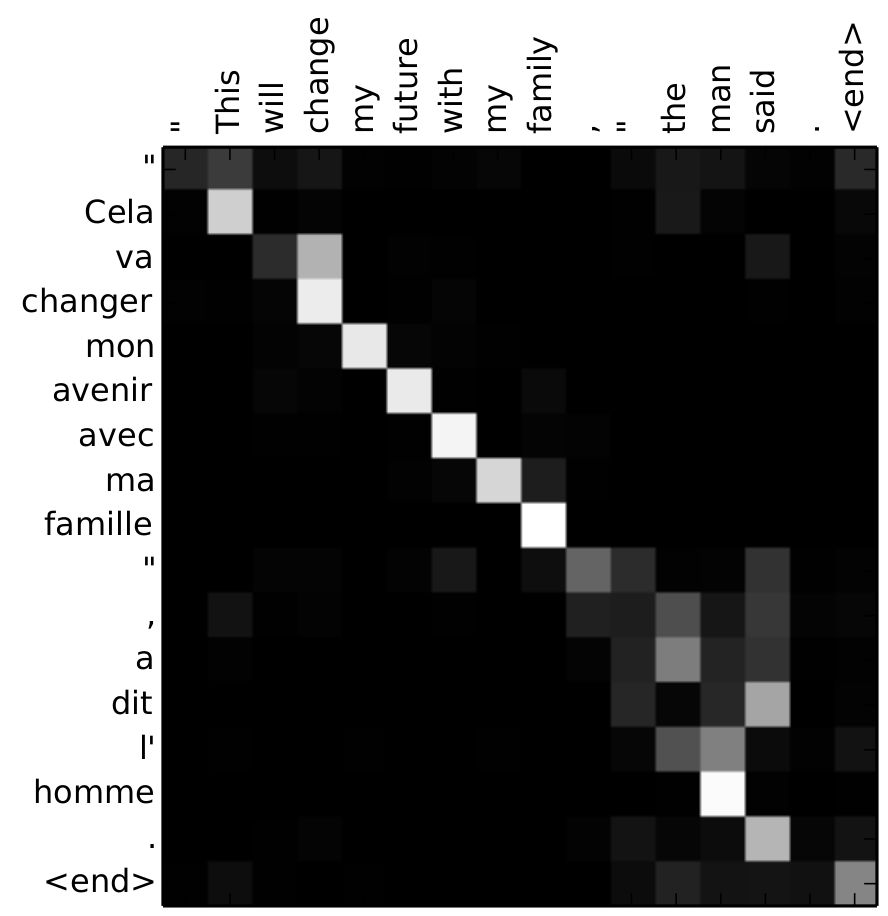 Figure 6: Matrix of alignment scores for the translation of «“This will change my future with my family,” the man said.» to French, «“Cela va changer mon avenir avec ma famille”, a dit l’homme.» Figure is taken from Bahdanau et al. (May 2015)

The one-hot representation of the attention is non-differentiable hence it requires more complicated techniques such as variance reduction or reinforcement learning to train (Luong et al., September 2015). In order to remedy the non-differentiability of hard attention, Luong et al. (September 2015) proposed the concept of local attention. In their work, they call the soft attention mechanism, the global attention since it attends to all hidden states in the source sequence. The local attention, on the other hand, only attends to a window of the source hidden states. This mechanism first predicts a single aligned position for the current target word mimicking the behavior of the hard attention. A window centered around the source position is then used to compute the context vector similar to the mechanism of soft attention. The local attention mechanism perfectly blends soft and hard attention together to save computation costs while preserving the differentiability of the model.

The attention mechanism in this setting will find the best correlation between each word in a sentence and the others, making self-attention an integral part of the recent advancements in embedding representations (Vaswani et al., January 2017; Devlin et al., June 2019; Yang et al., June 2019).

RNNs have been the preferred building block for time series data. Due to their ability of processing sequential inputs of variable length and capturing the sequential dependency of the data, these architectures have been the preferred building block for many NLP neural approaches such as language modeling (Sutskever et al., December 2014), neural machine translation (Bahdanau et al., May 2015; Cho et al., October 2014), and syntactic constituency parsing (Vinyals et al., December 2015). However, RNNs are only slightly parallelizable, that means the computational resources cannot be fully utilized during training and hence, leading to a very time-consuming training process.

Modeling long-term dependencies of a sequence input is a challenging task (Bengio et al., March 1994; Bahdanau et al., May 2015). The length of the path between long range dependencies has an inverse correlation with the ability of the model in learning these dependencies. Longer paths prevent the gradient or learning signals to be transmitted smoothly (Bengio et al., March 1994). Hence, the shorter the path between long range dependencies, the better the model learns. CNNs with a kernel of size \(k\) have a maximum path length of \(O(\log_k(n))\) for a sequence of size \(n\), while RNNs have a maximum path length of \(O(n)\). Since Transformers are solely based on the attention mechanism, the maximum path length in this architecture is \(O(1)\), letting the model to seamlessly capture long-term dependencies of sequential inputs. Table 2, lists a summary of computation comparison between the Transformer model, RNN, and CNN.

Table 2: Computation comparison between the Transformer model, RNN, and CNN for a sample of size \(n\), hidden representation of \(d\), and CNN kernel size of \(k\).

Figure 7 shows the different types of dependencies captured via 8 attention heads for the word because in the sentence The animal didn’t cross the street because it was too tired. In particular, we will focus on the contingency dependency in this figure. The word because is an explicit discourse marker which indicates a contingency relation. The blue and green attention heads (marked with thicker borders) in Figure 7 have successfully captured this dependency relation. 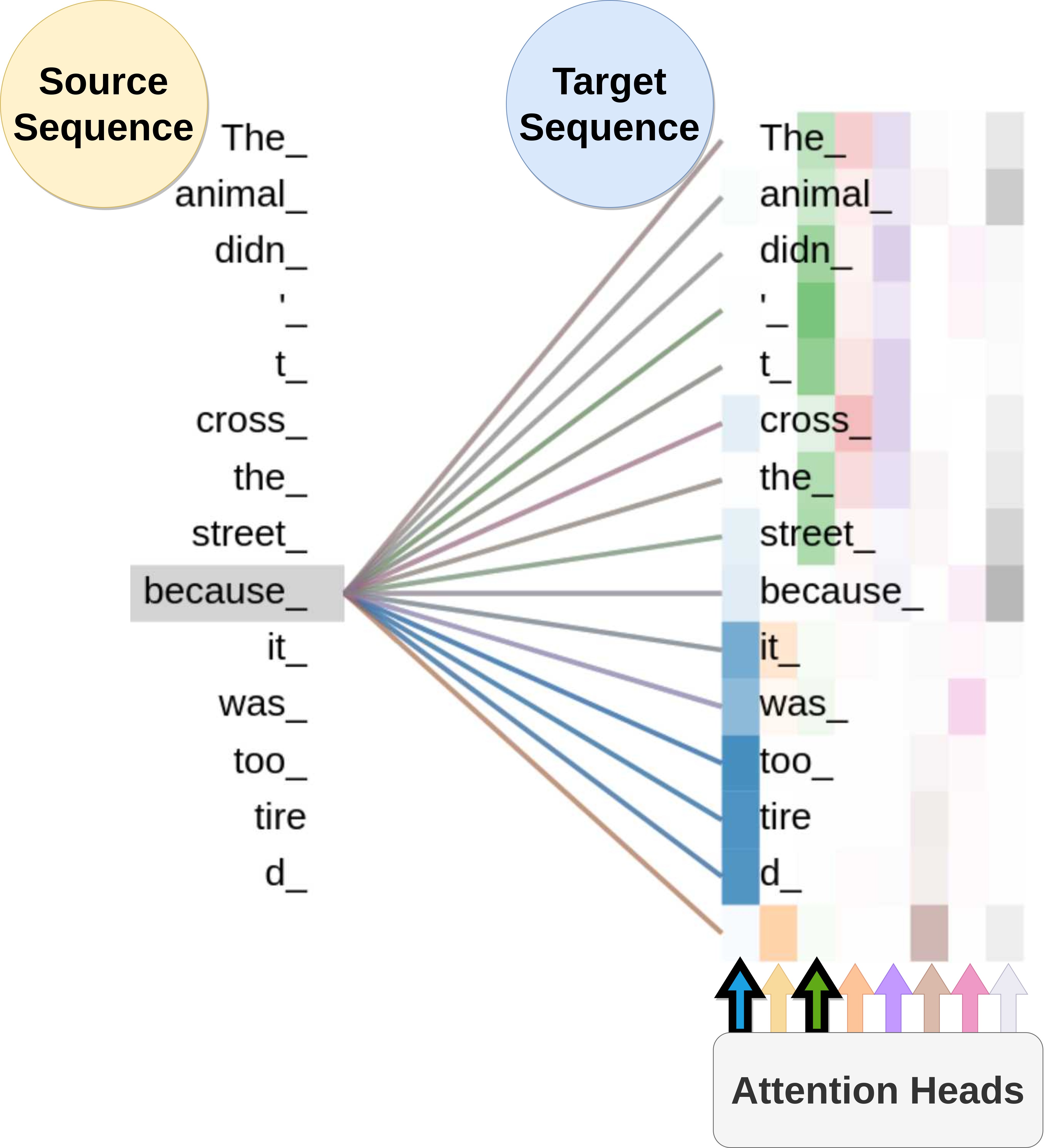 Figure 7: Matrix of alignment scores of the multi-head self attention model for the word «because» in the sentence «The animal didn’t cross the street because it was too tired». The image was produced using the pretrained Transformer via Tensor2tensor (Vaswani et al., 2018).

The scaled dot product attention is used in all instances of the attention mechanism in the Transformer model, since it can be implemented using highly optimized matrix multiplication algorithms. Transformer views the encoded representation as key-value pairs \((K,V)\) of dimension \(n\), although both the keys and values are the encoder hidden states, this distinction in notation helps with better understanding of the model. The output of the decoder is represented by \(Q\), the query, of size \(m\). The attention is defined as:

The multi-head attention with \(h\) heads performs the above operation \(h\) times, then concatenates the outputs and performs a linear transformation for the final result, given as:

The Transformer model was developed specifically for the NMT and follows the same principles of the sequence to sequence models (Sutskever et al., December 2014). The model is comprised of two modules: the encoder and the decoder module. 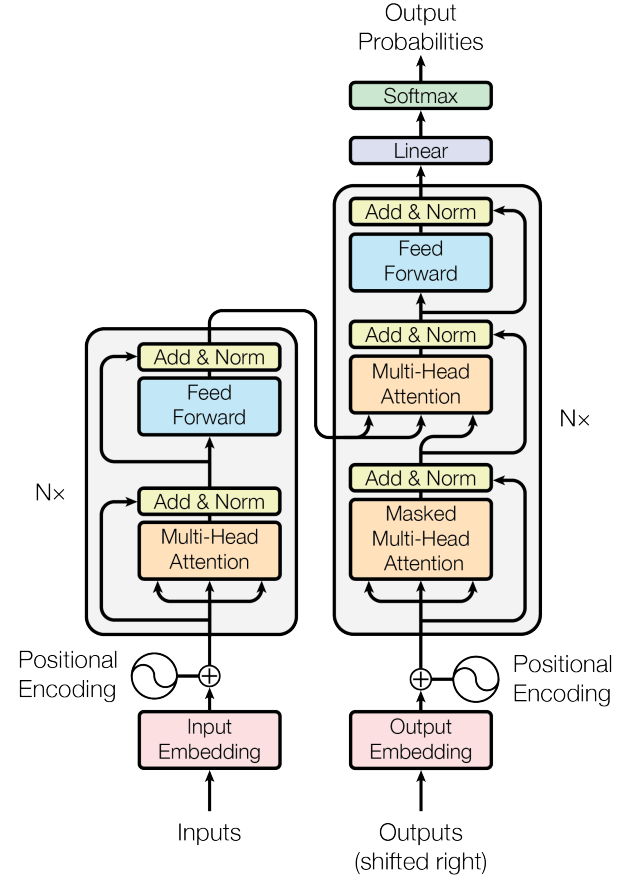 The encoder module (shown on the left side of Figure 9 generates an attention-based representation. It consists of a stack of 6 identical layers, where each layer is composed of 2 sublayers: a multi-head attention layer, and a position-wise fully connected feed-forward network. In order to encourage gradient flow in each sublayer, a residual connection (He et al., June 2016) is formed followed by a normalization layer (Ba et al., July 2016), i.e. the output of each sublayer is given by:

Where \(\mathrm{Sublayer}(x)\) is the function implemented by the sublayer itself.

The decoder module (see the right side of Figure 9) also consists of a stack of 6 identical layers. Similar to the encoder, each layer is composed of sublayers. In addition to the two sublayers in each encoder layer, the decoder incorporates a third sublayer, which performs multi-head attention over the output of the encoder stack. Analogous to the encoder module, each sublayer adopts a residual connection, and a layer normalization. The first multi-head attention sublayer of the decoder module is modified with a masking mechanism, in order to prevent the decoder to look into the future.